City of Indianola Updates that You Should Know

The Iowa Statewide Tornado Drill is scheduled to take place at 11:00 a.m. on Wednesday, March 24.

This week, Streets Division staff continued repair work on potholes by using 44 hours of labor and 1.2 tons of cold mix asphalt. Additionally, crews began grading unpaved gravel roadways and alleys to remove potholes and ruts from these driving surfaces. The reporting of potholes from the community is always welcomed and greatly appreciated. To do so, please call (515) 961-9415 or send an email to PublicWorksRequests@indianolaiowa.gov. Residents may also submit the information via the link below.  Crews will evaluate the area of damaged pavement and determine how to best address it.

The Planning and Zoning Commission will meet on Tuesday, March 9 for its regular meeting.  The agenda and meeting materials are available on the City’s website (linked below).

The City Council and IMU Board of Trustees will have a joint meeting on Wednesday, March 10.   This meeting will be to discuss the upcoming renewal for the City’s and IMU’s health insurance program renewal.  The City and IMU partner on this program to keep associated costs lower than if coordinated separately.  The agenda is available on the City’s website (linked below).  The meeting will be aired live via the City’s YouTube Channel and a Zoom Webinar (link and login information may be found in the meeting packet).

The final public hearing for the City’s Fiscal Year 22 budget is scheduled for 6:00 p.m. on March 15, 2021 at the Indianola Municipal Building (110 N 1st Street).  Linked below is a budget presentation provided during a previous City Council meeting.  As noted during the presentation, the property tax levy will remain flat for the upcoming fiscal year (at $13.63/$1,000 of valuation) even with adding three new Firefighters/Paramedics to help with increased calls and the creation of a rental inspection program mandated by the State of Iowa.  Also noted in this and prior presentations, Indianola continues to achieve one of the lowest property tax rates in the Metro, which is largely due to the economic growth of our community (~$200 Million over the last 5 years).

An invitation to an informational meeting on Thursday, March 11 at 6:00 p.m. regarding the Streetscape Project was previously mailed to all property owners on the City Square, as well as along Howard Street and Buxton Street.  During the meeting, staff will update attendees on the Streetscape project, including the associated one-way to two-way conversion on the Square and along Buxton and Howard Streets.  Due to the ongoing COVID-19 pandemic, this meeting will take place virtually.  This information is linked below.

Attached are the following reports provided by the Community Development Department:

Of the 14 projects listed, two are awaiting a submittal from the developer, three are in review and nine have been approved and are in construction.

The special election is over and it was a ton of fun, even though it ended like it did for me. It really doesn't matter. I'll be involved with things that are going on in the City.  I'll speak up.  I'll post things here that I think people should know. I'll help make Indianola a kind of College Town that Simpson students will feel comfortable making their own.

Thank you to everyone who voted. Thank you to the reporters and students who showed great interest. Thank you mostly to everyone who prayed. When you pray for God's will in the plans, then you can't be disappointed with an outcome. Most of you know that Jeremiah 29:11-13 is one of my favorite scriptures. I have JER 29 on my license plates. He knows the plans He has for me. Plans to prosper me and not harm me. His plans give hope and a future.

So, we move on. We let the City Council and the Mayor move on. We move on but still pay attention. Move on with me in that way. And thank you again for your involvement in this election.

One Snowflake Can Become a Blizzard

Today is the day. Election Day. It's easy to think, "What good will my one vote do?" Like the title says, though, one snowflake can become a blizzard. We know that well in Iowa.

I appreciate every vote, so please take a few minutes to exercise this right you have. I thank you in advance.

Then head up to the north side of The Square to Crimson Anchor. I'm going to hang out there for awhile and would love to have any of you pop in to say hi, have a cup of their amazing coffee and let me have a chance to thank you. I plan to be there from 10:30-maybe noon.

I'll use other restaurants and coffee shops in the future. Hope to see you soon.

Here's the picture of the three of us running for Indianola Mayor. Channel 8's Cynthia Fodor did a zoom interview, but their zoom would not download or process for some reason. She had to simply use photos of us and merely state that we are running in a special election. I told her that I broke her camera.

The vote is tomorrow, March 2, 2021. Please head to American Legion, any time between 7 a.m. and 8 p.m. You'll need your driver's license. Someone will probably take your temperature, and I doubt if the whole process takes more than 10 minutes. 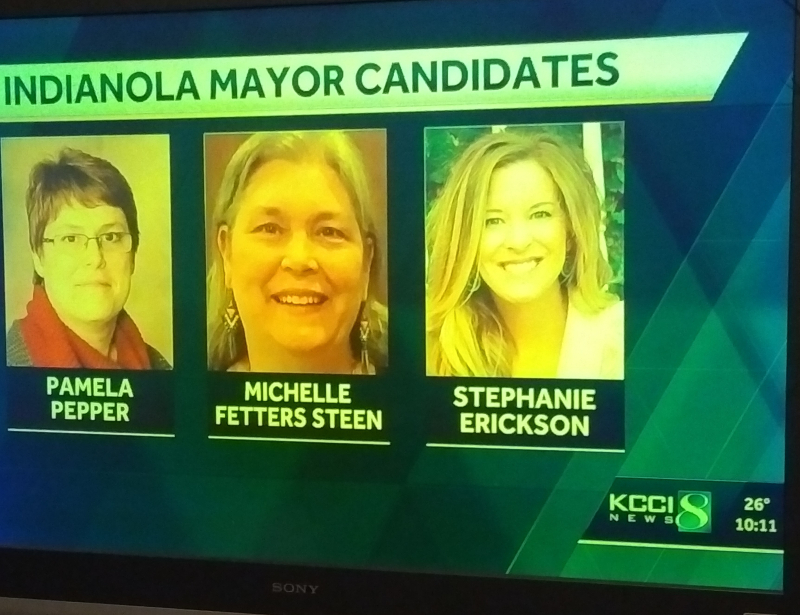 Question 1: What are your thoughts on the proposed combination library/city hall?

The special election for Mayor of Indianola is coming up quickly.

Be sure you have listened to everything we candidates have said in radio interviews (KNIAKRLS.com - the local Indianola station), have read everything we candidates have said in interviews (www.desmoinesregister.com and The Indianola Record Herald) or by reading the articles and our answers to questions sent in by the public in The Indianola Independent Advocate (indianola-ia.com). Go online with The Simpsonian, (thesimpsonian.com, the Simpson College online paper).  If you were in attendance at the Mayor's Youth Council panel at the high school, consider our introductions of ourselves and the answers to questions.

I haven't finished visiting businesses and talking to people.  I love meeting people.  With "social distancing" necessary, it has been nearly impossible to present ourselves in front of service clubs, church groups, etc., because most aren't meeting on a regular basis or are only meeting by Zoom, Skype....

A lot of thought went into answering the questions submitted by the public to The Indianola Independent Advocate and the interview questions conducted by Amy Duncan, George Shillcock, Andrew Swadner and Paul Hyatt.  Those reporters were thorough.  Thank you to all of you and to Becky Lane, sponsor of the Mayor's Youth Council, for arranging the panel for the high school students.  Though most of the students are too young to vote, they showed great interest by their presence that morning.

Communication, which means speaking and listening, are critical to the success of any leadership position.  Those two ingredients determine a good or mediocre leader.  I want your vote for Mayor of Indianola, Iowa; my home town, your home town.  Do your "home" work.

Today, Thursday morning, February 25, I had the pleasure of being on a zoom call with Paul Hyatt, Junior, and staff writer for Simpson College's student-run newspaper, The Simpsonian. We discussed a lot about how Simpson fits with the City of Indianola. I believe it was a profitable, worthy conversation.

If anyone wants to check The Simpsonian out, go to thesimpsonian.com. To contact Paul directly, go to paul.hyatt@my.simpson.edu

The article about the mayoral candidates won't be posted for a couple of days. This is an online newspaper.

Seven a.m. (7:00 a.m.) is early.  But I'll tell you something. When you get up and around to be at a meeting at that time, you know it's important and you want to be there. This is when the Mayor's Youth Council meets at Indianola High School.

That's what I can say about the three of us running for Mayor in the special election on March 2, 2021, and about Becky Lane who sponsors the Council. I can say it, too, about the twenty high school students who attended, right on time at 7:00.

They opened with the Pledge of Allegiance. I'm impressed. The candidates for Mayor were then given three minutes to introduce ourselves and explain why we want to be Mayor of Indianola. After our introductions, the students were given the opportunity to ask questions.

My main point, and this applies to anyone of any age, is that people have to be involved. People with ideas need to surround themselves with "help." I made the point that my list of everything I've done (which just touched the surface) sounds like bragging - but weren't just done alone. Everything took help by various numbers of people.

If we don't get involved with the start of each process, we have no business complaining when the decision/s don't go our way. There's no "I told you so" allowed if you haven't opened your mouth.

Example, which I didn't tell this morning, is that due to a pretty awful car wreck where the drunk driver who hit us was killed, I got involved with Mothers Against Drunk Driving (MADD). Because of our experience and because of getting involved with MADD, I spoke at the Capitol before the Iowa Legislature to help convince them to lower the acceptable Blood Alcohol Level (BAL) for drivers. Which they did.

Not much can be done successfully, well or lasting without many people working together. I have been on many Boards and Committees where solutions have been found through studying the issues and making plans. But when other people find out the outcomes, many times they complain and question it all. ~Squeaky wheels.~ If they had been involved from the beginning, there wouldn't be as much arguing or push-back.

Like a well-oiled machine or a winning team, people need to get involved and work together. That is what I think the students on the Mayor's Youth Council will do. They are already beginning their involvement. I'm proud of them.

Proud of this opportunity

I find the right words so very hard to choose to start this particular blog. Fun. I'm having fun. But serious. It is important and serious.

As an adult, I've been involved with many political campaigns. Local County candidates, State candidates and Dr. Ben Carson for President.

I've said before, but it's true, I would be honored to serve Indianola as Mayor, even for the ten months left in Mr. Shaw's term.

Stephanie Erickson's was aired today (Monday 2/22), mine will be tomorrow and Pam Pepper's on Wednesday the 24th. The radio station is KNIA 94.3 FM. If you miss hearing them at the time the radio plays them, you may go to the website and listen to them online. The link for that is KNIAKRLS.com

I can also tell you that the Simpsonian College Newspaper will interview us this week. The purpose is to help students realize the ability and necessity to participate in the election process. I'll tell you more about that, about the student doing the interviews and writing the article, and how you can get a copy of the paper or read it online after it is completed.